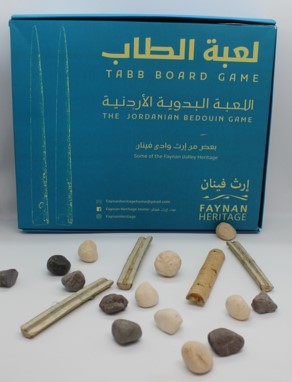 Once upon a time, the people of Faynan, Greigra and Bedouins in Jordan were holding stones, sticks and a board to play the Bedouin game »Tab«, which they inherit playing it nowadays. What makes this game distinguish not only that it is enjoyable but also that when you buy it you participate in reviving it, support the people of Faynan and Greigra in Southern Jordan, and increase the awareness of the cultural heritage of Faynan. The board piece is crocheted handmade by the women, its colors from their mountains, its sticks from their plants and its dice from their stones, which will definitely make you feel like you are holding Faynan between your hands. As the game starts, the excitement increase and the voices rise with plenty of laughing, while the people surround the players and help whom they want to help, then suddenly the team becomes more than two. We think this is the first time in Jordan this game is being made to be shared with you in Jordan and worldwide.

We wrote the roles of this game based on how our grandparents used to play it and until today in Faynan and Greigra south of Jordan, which might be a bit different within other Bedouin communities around the world. Don’t forget to share your stories, pictures and suggestions on our Faynan Heritage Home social media platforms. 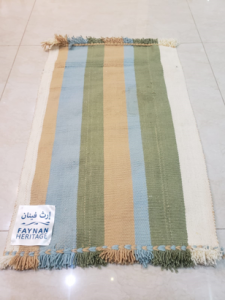 Handmade Weaved Carpet 82X55 cm. Could be hanged on wall, put on sofa or ground